Gold and Silver Deposits in Arizona, by County

Gold and Silver in Cochise County. Cochise County is in the southeastern corner of the state, gold is associated with copper, silver and lead in porphyry copper deposits in the Warren (Bisbee) district, associated with lead and silver ore in the Tombstone district, and the precious metal is found in vein and disseminated deposits in the Turquoise (Pearce) district. The gold and silver lodes at Pearce may be quite extensive with mineralization found described in several different deposits. Gold is reported in the Manzoro district of the Dragoon Mountains; and the Dos Cabezas and Teviston districts in the Dos Cabezas Mountains. Other deposits occur in the  Huachuca Mountains and in the Swisshelm Mountains. Gold placers occur in the Dos Cabezas, Teviston, Huachuca, Gleeson, Pearce, and Gold Gulch near Bisbee. For the most part, these are relatively small placers.


Silver deposits in Cochise County are in the Tombstone district, where found as disseminated flakes at the Empire mine and as small masses of wire silver at the Flora Morrison mine. In the Warren (Bisbee) district, silver is found in small amounts in secondary chalcocite, and less commonly with halloysite. At the Commonwealth mine in the Turquoise (Pearce) district, silver is found with cerargyrite, embolite, and jarosite in hydrothermal veins. 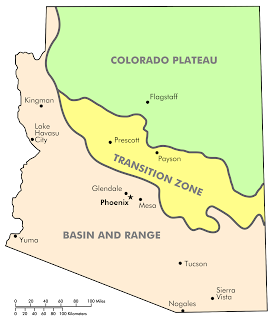 Gila County in east-central Arizona is a source for a small amount of gold from Dripping Spring, Barbarossa, Globe-Miami, and the Payson placers. Gold is associated with copper and silver lodes and  veins, and in porphyry copper deposits in the Globe-Miami district; with copper, lead, and silver in the Barnes district of the Dripping Spring Mountains and in ore in the Payson district. Silver occurs in the Globe district as minute flakes in calcite at the Continental mine, and also forms stout wires in the oxidized ore of the Old Dominion mine. Fine specimens are reported in placers about four miles north of Globe. At Richmond Basin, silver is one of the chief ore minerals and is found in large masses. At Payson, wire silver occurs in the oxidized ore of the Silver Butte mine.

Greenlee County to the east of Graham County, has some gold associated with copper and silver ore in porphyry copper and in veins at the Clifton-Morenci district. Some gold placers also occur along San Francisco and Chase creeks and some interesting veins are located in the Ash Peak district.

Gold in Maricopa County on the central part of Arizona, occurs with lead and silver in the Vulture and Cave Creek districts. Some gold is reported in the Phoenix and Bighorn Mountains. Some placer gold is described at Vulture, San Domingo, and Hassayampa, and silver is associated with granitic pegmatites in the White Picacho District.

Mohave County lies in the northwestern corner of Arizona. In this county, gold veins are found in the San Francisco and Katherine districts in the Black Mountains, as well as in the Cerbat, Chloride, Stockton Hill and Mineral Park districts of the Cerbat Mountains. Examine Google Earth and search for "Oatman, Arizona", to get a view of the San Francisco district - there are literally hundreds of mines, prospects and veins in the area. Two mines are currently mining gold, the Gold Road mine, and the Moss mine, both located north of Oatman.

Gold occurs with silver in the Maynard district of the Hualpai Mountains and is also found in the Gold basin district. Gold is described in placers referred to at the Gold Basin, Chemehuevis, Lewis, Wright Creek, Lookout, and Silver Creek placers.

Silver is found in masses several pounds weight in the deeper workings of the Distaff mine in the Cerbat Range; it occurs in the Lucky Boy and Samoa mines in the Chloride district; and is also found in the Golden Bee and Queen Bee mines of the Mineral Park district. Silver is found in solid chunks and masses of wire in the Banner group of the Stockton Hills district, and found in the Tennessee-Schuylkill mine of the Wallapai district.

In Pima County along the Mexican border, primary gold is found in the copper and silver in the Ajo district and the precious metals is also found in the Baboquivari Mountains. Gold is found with copper, lead and silver in the Comobabi and Empire mountains, and placer gold occurs at Greaterville, Quijotoa, Papago, and Horseshoe Basin districts. Less important are the Las Guijas, Old Baldy, Baboquivari, Armagosa and Alder Canyon placers. In 1924, an 11-troy-ounce gold nugget was recovered from the Greaterville placers. Silver occurs with chalcocite and cerargyrite at the Apache property in the Tortolita Mountains. The precious metal occurs with stromeyerite and tetrahedrite at the Cerro Colorado mine, in the Cerro Colorado range.

Silver was found as magnificent crystallized and wire specimens at the Silver King mine and occurs in the upper parts of the Resolution (Magma) mine of the Superior district in the Galiuro Mountains. Silver is also reported as wire silver in small cavities the Little Treasure, and Adjust mines of the Saddle Mountain district.

Santa Cruz County along the Mexican border, primary gold is found with lead, silver and copper ore in the Oro Blanco Mountains, and reported in the nearby Santa Rita Mountains and Patagonia Mountains. Gold placers are reported at Oro Blanco, Mowry, Harshaw, Tyndall, Nogales, and Palmetto. Silver deposits are found at the Domino mine of the Palmetto district of the Patagonia Mountains with crystallized cerussite and wulfenite. The precious metal is found with tetrahedrite at the Worlds Fair mine of the Harshaw district. Silver is also described as small crystals surrounded by magnetite in diorite on the southern slopes of the Santa Rita Mountains.

In Yavapai County near the center of the state, gold is found in the Verde district in massive volcanogenic sulfide deposits containing copper, silver, gold and zine ore. The United Verde mine and United Verde Extension mines were major mines that produced very rich massive sulfide deposits, but the mines left behind an unknown amount of low-grade ore. Gold is also found with lead-silver ores the Bradshaw Mountains at the Big Bug, Peck, Walker, and Tiger districts and in the Hassayampa and Black Canyon districts, in the Pine Grove and Agua Fria districts; and found with copper-silver ore in the Groom Creek, Turkey Creek, Bradshaw, and Tip Top districts.

In the Eureka district of the Santa Maria Mountains, gold is found with copper, silver, and lead. In the Martinez district, it is found in the Date Creek Mountains and gold is found in the Black Rock district of the Wickenburg Mountains. The precious metals is also described in the Plomosa, Sheep Tanks, Dome Rock, Laguna, Trigo, and Gila Bend Mountains. Gold placers are found at Weaver Creek, Rich Hill, Lynx Creek, Big Bug, Minnehaha, Hassayampa, Groom Creek, Copper Basin, Placerita, and in the Black Canyon district. Many smaller placers are also reported. A 8.7-troy-ounce nugget was found on Weaver Creek in 1930, and in 1932 to 1933, several nuggets up to more than 3 ounces were recovered from the same area.

In Yuma County gold occurs with silver in the Kofa and Gila mountains. In the Harquahala Mountains, the precious metal is found with copper and lead. In the Cienega district of the Williams Mountains, gold occurs with copper. In the Castle Dome district of the Castle Dome Mountains, gold is found in lead-silver ore. In Yuma County, placer gold is found at La Paz, Gila City (Dome), Plomosa, La Cholla, Oro Fino, Laguna, Castle Dome, and Kofa districts. Less important are the Muggins, Trigo, and Harquahala placers.

The chemical symbol used for silver is Ag. Silver occurs as silver-white metal that is commonly tarnished gray to black. The native metal is opaque, sectile, ductile and malleable with hackly fracture. It is soft (H = 2.5-3), with high specific gravity (G =10.1-11.1) and crystallizes in the isometric, hexoctahedral crystal system. Crystals are typically malformed, acicular, reticulated, or dendritic. It commonly occurs as grains, plates, or scales. Silver is a common secondary mineral found in the upper portions of silver-bearing deposits, or in the zone of sulfide enrichment with chalcocite. Less commonly, silver is primary, disseminated in galena or in tetrahedrite.

GOLD in ARIZONA - a prospector's guide, by W. Dan Hausel

GOLD IN ARIZONA - A PROSPECTOR'S GUIDE copywright by  W. Dan Hausel The Superstition   Mountains - host for the Lost Dutchman...